Tether is now one of the biggest money market funds in the world, holding more commercial paper than companies like Amazon and Google. According to JP Morgan analysts, although Tether might prefer the simpler solution of holding their USDT reserves with US banks, they have been pushed into a corner because of their limited access to such banks caused by their reputation for shady behavior, including, in the past, misrepresenting the sufficiency and quality of those USDT reserves. The kind of big banks that could accommodate a material portion of these reserves, including JP Morgan themselves, would likely steer clear of Tether due to reputational risk concerns. 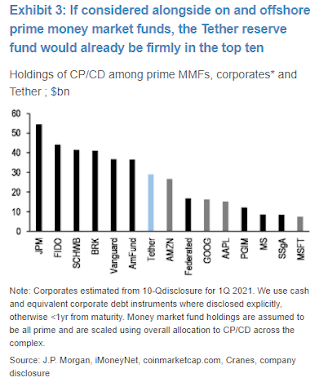 Are some stablecoins becoming “untethered”?

And speaking of stablecoins, some may be finding it challenging to maintain their fiat (i.e., USD) pegs. I’ve had some discussions on LinkedIn about how real some of this “untethering” (in the case of USDT) is, given that some data sources show that everything is business as usual. In any case, JP Koning has pointed out that the TerraUSD algorithmic stablecoin is one of them that is struggling (see first figure below). It’s currently #5 on the stablecoin league table. Also, USDT has been struggling (see second figure).

Commerzbank trials blockchain programmable money with BASF, Evonik for supply chain payments
Commerzbank was involved in a joint blockchain project with chemical firms BASF and Evonik, who frequently trade with each other. Supply chain payments were verified, paid and logged in a fully automated manner using smart contracts. In other words, it used programmable money or cash on ledger. At a legal level, the digital cash was e-money.
Iran Is Using Bitcoin Mining to Circumvent Sanctions, According to Elliptic
Iran is using Bitcoin mining to circumvent and lessen the effect of the economic sanctions that the U.S. and other countries have applied to the country since 2006, according to a new study by Elliptic. The country is indirectly using bitcoin mining to export part of its energy reserves, whose exports are being hampered by the said sanctions. https://www.elliptic.co/blog/how-iran-uses-bitcoin-mining-to-evade-sanctions&nbsp;

*For those interested in intra-day updates and news that didn’t make the Daily Digest cut, please check out my Diigo fintech bookmarks: https://www.diigo.com/user/kiffmeister/Fintech