Euro-area residents’ holdings of a future digital currency could be limited to 3,000 euros to prevent bank runs, European Central Bank Executive Board member Fabio Panetta suggested in an interview with Germany’s Spiegel.

“Crypto asset manager CoinShares has reported that investment inflows into institutional cryptocurrency funds surged last week, and the majority of it was Ethereum. The report states that of the $245 million crypto inflow last week, 80% of it or $195 million was invested into Ethereum ahead of the launch of the Chicago Mercantile Exchange Ethereum futures contracts on February 8. Comparatively, Bitcoin had $41.9 million of the weekly flows, with a year-to-date total of $2.02 billion.”

BlockFi launched its new Bitcoin Trust that was registered with the US Securities and Exchange Commission (SEC) late last month. The Trust will issue shares through private placements, and the value of the shares will reflect the value of BTC held by the trust (minus expenses and other liabilities). Initially, trust shares will be made available to global institutions and other qualified investors. Later on, access will be expanded to include accredited individual investors in the United States. https://blockfi.com/the-blockfi-bitcoin-trust-offers-a-new-way-to-invest-in-bitcoin

In my recent monthly, I talked about how USD-pegged Empty Set Dollar (ESD), launched in September 2020 and one of the first algorithmic stablecoins to come to market, briefly held the #6 position in the stablecoin league table. (An algorithmic stablecoin adjusts its supply to maintain its peg.) However, ESD broke its peg massively in January, and is now trading down around $0.20 and has dropped down to #13. 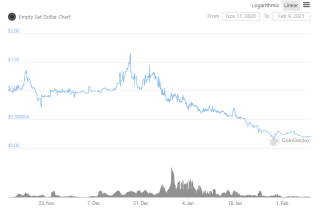 However, another very viable-looking USD-pegged stablecoin, TerraUSD which sits at #8, has been brought to my attention by @CptDig. The peg isn’t absolutely perfect, as it has occasionally spiked down to nearly $0.96 and up to $1.04, but since it launched in October 2019 it has spent most of its time within a $0.98 – $1.02 band, which is better than any other algorithmic USD-pegged stablecoin I’ve seen. TerraUSD is also part of the Terra family of products that seem to be seeing real use cases.

Terra is a delegated proof of stake system that uses the LUNA token as collateral for the stablecoins it issues and it has several active use cases underway: