China’s Banking and Insurance Regulatory Commission (CBIRC) has tightened rules governing how online lending platforms fund their loans, a move that analysts say could hit the valuation of Jack Ma’s Ant Group. Under the rule changes online lending platforms will have to contribute 30 per cent of the funding for loans they offer in partnership with banks. The CBIRC will also cap how much capital commercial banks can commit to online lending in co-operation with tech platforms. The new rules will come into force next year.

The Securities and Exchange Board of India (SEBI) is reportedly cracking down on high-level executives who hold Bitcoin and intend to take their companies public in the coming months. SEBI has asked promoters of such companies to sell off any cryptocurrencies they hold before raising funds from the public, adding that investment bankers and securities lawyers involved with any ongoing Initial Public Offering (IPO) process were already informed of the new regulation.

Morocco’s central bank to investigate the use of CBDC

Morocco’s central bank Bank-Al-Maghrib (BAM) has reportedly launched an exploratory committee to investigate the pros and cons of a central bank digital currency (CBDC) for the Moroccan economy. But this could be the same old news that was reported back in 2019 because there’s nothing new reported on the BAM website.

The only way to kill Bitcoin is to make it so that people don’t need it anymore. If no one wants a devaluation-proof, censorship-resistant, permissionless, borderless, non-discriminatory, teleporting financial asset, then no one will feed it energy, and it will die. Perhaps humanity can come up with another technology that addresses these needs. But until then, Bitcoin will thrive.

People Are Now Searching for NFT More than DeFi on Google

Non-Fungible Token (NFT) mania is now outpacing decentralized finance (DeFi). The search interest for NFT gained traction in the middle of January 2021, and last week more people were busy learning about digital collectibles more than DeFi in the US, as per Google Trends.

How Common is Crypto? 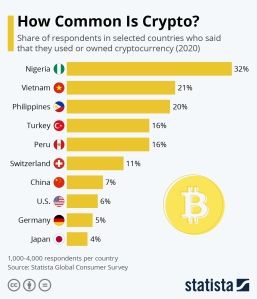