El Salvador President Nayib Bukele announced that he will send a bill to the country’s congress to recognize Bitcoin as legal tender. El Salvador is one of a handful of non-US nations that uses the US dollar as its official currency. The forthcoming legislation is being framed as the next step in a partnership between Strike, which launched its crypto wallet app in the country in March. Reportedly, some 70% of the population there does not have a bank account, and 20% of the country’s GDP comes from remittances sent by migrants to family members. If Bukele’s Bitcoin bill goes through without a hitch, El Salvador will be the first nation to officially recognize Bitcoin as legal tender.

This is happening against a backdrop of rising tensions with the United States. In late-May, the US Agency for International Development announced that it will be redirecting its funding from El Salvador’s state institutions to its civil society groups, over the country’s removal of Supreme Court justices and the Attorney General, and more generally concerns about transparency and accountability. Bukele’s New Ideas party won a supermajority in February 28 elections, and in May voted to remove the five justices from the Supreme Court’s Constitutional Chamber in a process the justices said was unconstitutional. The new congress also voted to replace the Attorney General with a Bukele loyalist. Those moves combined with the new congressional supermajority removed the remaining checks on Bukele’s power.

My starting position was that “legal tender” is a rather meaningless concept, especially when it’s not enforced. The Wikipedia definition is “a form of money that courts of law are required to recognize as satisfactory payment for any monetary debt”, but it’s not worth much if it’s not enforced, and that’s an issue in many countries. For example, good luck buying a meal in Shenzhen with some physical yuan, the legal tender in China. But there are many interesting wrinkles around “legal tender” that came out in several Twitter threads in the wake of the El Salvador announcement (e.g., Caitlin Long and George Selgin). And for deeper thoughts about the actual meaning of the term “legal tender” there’s paragraphs 66+ in the recent IMF working paper on legal aspects of central bank digital currency (CBDC) and the “money in the twentieth century” paper by Marcelo Prates. 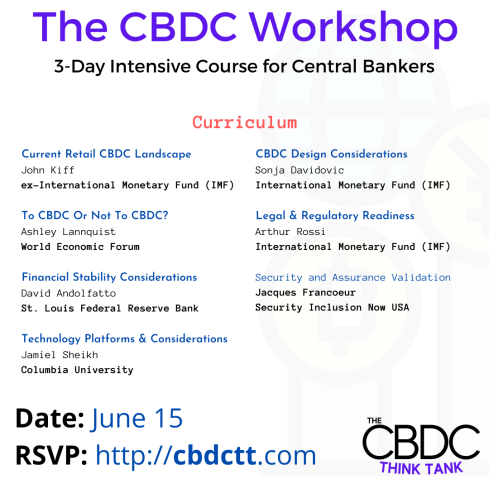 *For those interested in intra-day updates and news that didn’t make the Daily Digest cut, please check out my Diigo fintech bookmarks: https://www.diigo.com/user/kiffmeister/Fintech